The first definition on Merriam Webster of “Original” is:

original (noun)
orig·i·nal |
Definition of original (Entry 1 of 2)
1 archaic : the source or cause from which something arises
specifically : ORIGINATOR

I read somewhere recently that there’s no such thing as an original thought. The way this person explained it, I thought… wow. Your thoughts are created from all that you’ve been introduced to previously. So when you hear a radical idea, or when thoughts really hit you, maybe they are life changing. Literally. They will forever change what thoughts you will think in the future.

I suppose with creative works such as photos or illustrations, those may be a little closer to being “original” than an idea. But wait, no. An idea is a creation just like those creative works. It’s just a matter of how you present it. I suppose if someone came out of the womb and was an artist, that maybe they could be “original”. However, does it make a difference what the mother did during the pregnancy? You know those studies on playing classical music while your baby is forming, or being physically active to smooth along the pregnancy, or even fulfilling your cravings vs saying “Pickles and peanut butter is too weird. I’m not doing it.” Then again, a child is just a mix of the DNA of their parents. Not even the child is original. Imagine a multi-racial child… sure, there’s no other DNA exactly like this person we’re imagining. Even siblings with the same parents can have drastically different DNA (source). While it may be the first time we see DNA like that, it’s really just the mothers and fathers DNA combined. You took 2 ideas and combined them, making it a newer idea. Something that has never been presented this way. With the definition of original, you could say that the parents were the original ideas that created this new idea. Then wouldn’t you have to say that their parents were actually the original ideas, and then their parents and so on? The only original DNA comes from the very first people? The whole idea of evolution. This stream of “What’s original” can be applied to pieces of art and music and everything. When someone is inspired by something, that is the influence from the original idea for something new. or… new-er. So nothing is original except the very original. Or maybe everything is original since nothing is the same? 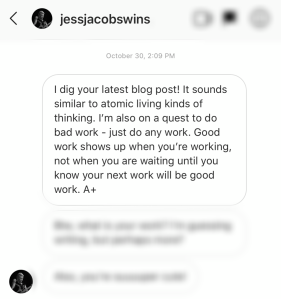 Even my last blog post, Three, is a collection of ideas, none of which are original, and were presented like this for the first time (that I know of). @jessjacobwins messaged me on Instagram about how what I wrote sounds similar to Atomic Living (link to blog post w/ embedded youtube video of TED talk). I hadn’t heard of Atomic Living specifically before, however, someone that I’ve read or listened to may have and shared some of the idea with me that led me to being here, a different presentation of the idea, and even having the title of the idea suggested to me.

It’s a lot. And maybe everyone already knows this. This is a thought, an idea, that has changed me forever.

Also – it’s not a bad thing. I think it’s a beautiful thing. I imagine ideas as colours swirling around and creating new colours. In turn, this idea invalidates narcissism as it’s hard to say ALL MINE after reading/thinking about this. It’s like.. this worldly thing. You don’t own the people you love. Maybe your colours mix with theirs, or their colours mix with yours – one could be more prominent than the other. Colours don’t take eat/take over each other though. (I supposed you could say “what about black” but if you want to get really technical, black isn’t a colour). Even if there’s only a hint of a colour in another, that’s the DNA being slightly altered.

Am I missing something here?

Anyways, happy new year. Here’s to 2019 and to being inspired, loving deeply, and presenting things how they’ve never been presented before.